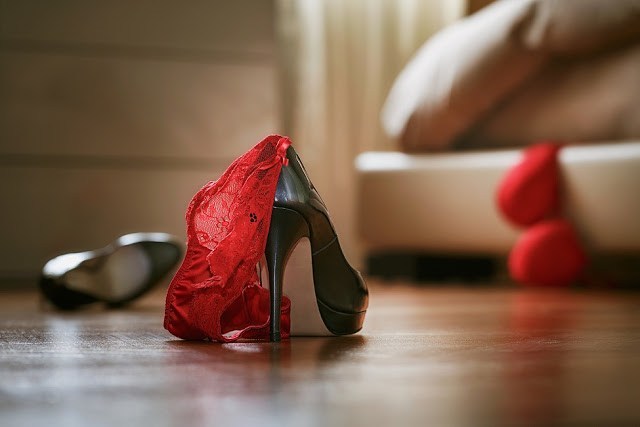 He wanted me on top of him in the sixty-nine position. He loved using his mouth to lick and nibble on my clit as he watched the juices flow from inside me. I waited until I felt the first slow flicker of his tongue, enjoying it for a few minutes before I reciprocated with a slow seductive swirl of my tongue causing him to freeze momentarily. I had to fight myself internally so that I wouldn’t have an orgasm too quickly.
He began to slowly slide his tongue into my silken walls while I moaned and swirled my hips slowly to the rhythmic flicker of his hot mouth. He was such a pro at handling me that I orgasmed before I was ready. I tried to swallow his dick as I trembled and released my juices on his lips. He moaned loudly in satisfaction like he usually does when he is inside of me.
My favorite song began to play in the background. I created the playlist specifically for tonight. That was my queue. I decided to take control of the situation and orally catered to that dick the way I know he loved it. I began to slurp on the tip making it sloppy and wet with my saliva. Being the competitive individual that he was, he began to smack my ass as he thrust his tongue inside of me. I moaned deeply and shuddered from within. Rotating my tongue around the length of his dick I sucked harder as I neared the head. He mimicked my technique and did the same to my pearl. I came again, even harder this time. He wiped my dripping wet slit with his face making it shiny with my nectar.
He was a freak like that. I certainly had no complaints about his lovemaking, Well, other than the fact that I couldn’t get enough sex from him as I wanted. For that reason, I have decided to make this our last sexual encounter. Once I changed my phone number and moved to away to a new city when my lease expired in two weeks it would be over. Cutting all ties with him was going to be one of the biggest challenges of my life. It had to be done though unfortunately.
I climbed off his face and laid on my side remaining in the same position. We continue to tenderly pleasure one another orally bringing one another to multiple orgasms. The feeling that I was experiencing was so intense that I began getting teary eyed. He could never know he made me that weak. The fact that he was not my man due to my fear of getting my heart broken again caused me to hide my true feelings.
I adored him but I was no fool. Perhaps I was because the reason tonight was so passionate and we were taking our time with one another was because he knew that I would be moving away to Atlanta, GA soon. He looked broken when I told him, but he would get over it. They all had no choice to once I moved on. I often think that I am my own worst enemy, but having my love taken for granted again ever in life was not an option. Until I left, we would both take one another to paradise. I painfully ignore what feels like his tears on my thigh where his head was laid at the perfect angle for his tongue to gobble me up taking me to orgasm once again. I cried out my pleasure as tears now began to form in my eyes and spill down my cheeks. My mind began to fill with both good and bad memories of our time together.
We were both crying and moaning so loudly that I heard my neighbor’s bed squeaking after a while. That made us both stop to laugh because I swear that couple seems to really go wild whenever he visited. We were still in the sixty-nine position ten minutes later when the squeaking stopped. The man must have busted his load. I felt sorry for the woman because as usual, her man would be snoring shortly. I imagined while he slept that the woman masturbated until completion.
It was almost three o’clock in the morning when we finally stopped the foreplay and began to have sex. I didn’t want him to see my glassy eyes so I laid on my stomach and pulled my right leg toward my chest to give him access to my overly-soaked tunnel. He entered me slowly going deeper with each thrust. My walls automatically tightened around him as the sensations rippled up and down my body. I felt his tongue on my neck. He knew that made me gush. I could tell that tonight was going to be more than I was emotionally prepared to handle.
Originally posted on: penzierotica